The Unbelievable Story of Lady Grace 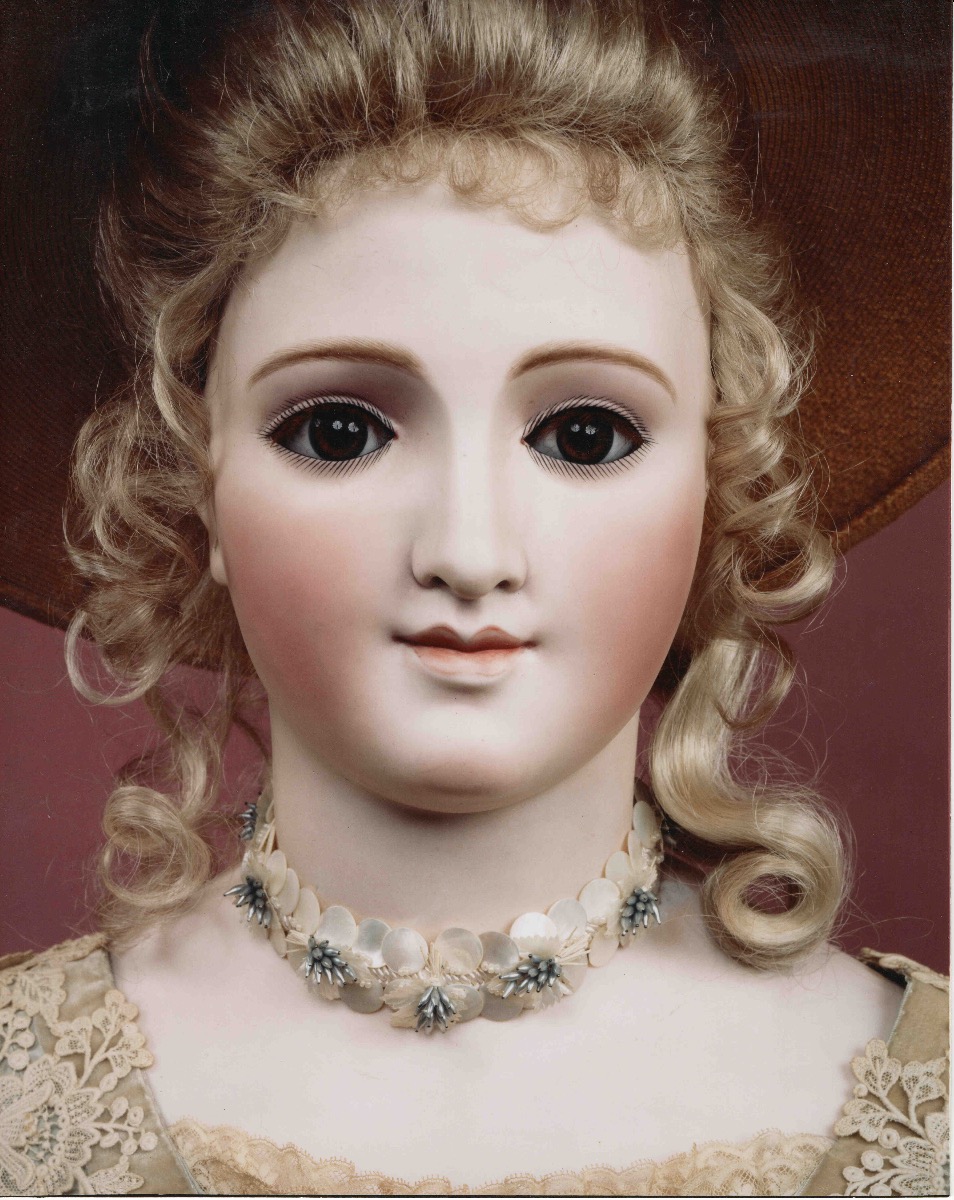 The lovely century old lady of yesteryear cannot tell her age, nor can the human eye behold her. But experts recognize this rare piece as the early work of the Bru Firm in France about 1880.

We beg her tell a little of her history but alas, she remains as closed-mouthed as she was created and the cloud of mystery hovers, concealing definite facts.

First, let me tell you how I found her. Everyone in Dolldom has the dream and joke of finding a Bru at a garage sale, right? One day in August 1988, I all but did! I was returning home from a friends home and decided to stop at a garage sale about one mile from home and asked the normal question, “Do you have any old dolls?”. The owners of the home said “No”, but a teenage girl in the yard stated that her mother had lots of porcelain dolls which she sometimes sold. I asked if she would mind taking me to her home, so we walked down the block and her mother invited me in!

To my utter dismay as I walked through the door, in the corner of the room on a settee sat a life-sized lady doll surrounded by dozens of children (dolls).

Disguising my shock, I asked about the smaller dolls and worked up enough courage to ask about “The Lady”. I have been in the UFDC antique doll field since 1976, have seen many world famous collections, and purchased a full doll library and have never seen nor heard tell of a life-sized 5’7” lady. I knew immediately she was French, and upon asking, was told she was a Bru.

I am a person of vision, looking for an outlet for my creative mind, and immediately I knew that the doll world would love her. The antique reproductionist, the fashion collector, or anyone who needed a mama for their collection of children and babies would simply have to have one! I therefore knew that, if I could acquire her, she would pay for her self, (a requirement from my husband for any “frivolous” whim I ever come up with).

To make a long story short, the lady stated her price so we robbed Peter to pay Paul in cash by the following Monday. I feared she would change her mind, but no, “This was meant to be!”

The original parts acquired consist of porcelain socket head, hallow glass eyes with red veins painted on the sclera, cork pate covered with paper mache, separate bust breast plate, and connecting hardware. I found a penciled date of 1915 on the inside of her fore head. Her original fur eyelashes which has probably been eaten away by moths were probably replaced at this time by her refurbisher. She was given both upper and lower lashes of human hair which was held between two pieces of tape and then cut to length and inserted under the new plaster which held the eyes in. I immediately removed these lashes and gave her new fur lashes which she would have originally had. Also, she came to me on a non-original dress form with stuffed arms and hands. I searched for graceful mannequin hands to replace these.

Upon examination, I found the unusual indention around the hair line circumference of the head. Research attributes this patented design to a German mannequin maker named Kabelka. This allowed for a wax overlay on the entire pate which later received the individually implanted hairs for her wig. I believe there was French newspaper mache applied to the cork pate under the hands of the refurbisher in 1915. The purpose of this was to fill in the indented hairline. She had probably lost her wax and implanted human hair wig in years prior. The previous owner had said she came with a dark human hair wig. The indentation has been removed in our mold-making process to avoid confusion in the mind of the consumer.

It was supposed that the original may have been used as just a head and bust for a jewelry or coiffeur or hat mannequin for a store. But careful examination and expert deductions from researches suggest otherwise.

Very few of these Bru pieces are known to exist. One, at least, is marked Bru and some are not. At least one, but not all, has the indented hair line for overlay application of wax and hair implantation.

I have tracked back this mannequin to two of its previous owners but that’s as far as the genealogy has gone, to date. I have also been blessed to find some rare children mannequins. It has been thrilling to see the fully articulated jointed wooden hands and fingers. The workmanship is incredible! These mannequins are truly pieces of art.

The Lady Bru came to our home with her dog and baby two days after I met her. At first we were startled when we entered our home after being away and found a “person” standing there, but that soon wore of. I named her “Lady Grace” because I felt it was by the grace of God that gave me such a gift as this, specifically at this time in out young struggling lives when we could somehow afford it.

I knew what I waned to do with her, but I did not have the time or finances to do so. After much deliberation, I offered mold and photograph rights to 3 major doll mold firms. One by one they turned down the offer, saying it was too big of a project with an unknown market.

I decided I needed to be a good steward of this treasure, so I found a partner and jumped in the soup. And soup, thick soup, it became! Everyone loved her’ our first ads brought hundreds of calls but molds were not ready for seven months due to circumstances beyond our control. Being a consciences perfectionist, I became desperately depressed when I could not fulfill peoples expectations. My faithful support team, and patient customers buoyed me up and I kept finding promises in the Bible that I “need not fear”. I learned a lesson. “I cannot control everything and make things happen. Only God can do that!”

As the molds were made available and people were so thrilled, the months of frustration faded and my motivation and vision returned.

My Ultimate goal is to preserve Victorian history with professional photography and lithography of Lady Grace and her children mannequins dressed in museum quality fashions of the period in special hand selected museums or settings of that time. These will be sold in the form of a book or photographic portfolio in the near future. Someday one may be able to visit them all in a museum and see, first hand, this story that will live on in the hearts of us all, The Lovers of Victoriana.